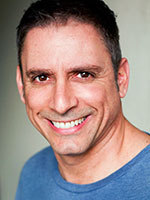 Lou talks about his latest project that he’s super excited about! He just finished filming teaser videos for it and it’s a comedy called 30 Dates on Craigslist, which Lou described as “Sex in the City for guys.”

Lou tells us about how he wrote a TV script based off of a very successful Disney and then had it stolen by the rep he was working with. He saw it on TV six months later. OUCH!

Filming the teaser videos for his upcoming movie that he’s written and producing: 30 Dates on Craigslist. He’s pulling out all the stops, no expense spared!

Lou differentiates himself by being himself. He’s very selective about the jobs he takes and knows what he wants for his career. He also goes out of his way to be ultra professional in everything he does and this goes a long way to helping him build his business.

Being focused and organized. He doesn’t let himself get distracted.

Lou would have started earlier.

• Talks about how his early life ended up shaping his career choice.

• His take on when people ask him “So, have you made it yet?,” or look at his career so far and say “Don’t worry, you’ll get famous.”

The race isn’t won by the fastest or the best. It’s often won by the person who simply stays.

Non-Performance Specific Book
Outliers: The Story of Success by Malcolm Gladwell
The War of Art by Steven Pressfield

Where can we find Lou Santini?