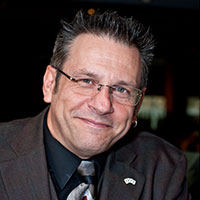 Listen in as I talk to magician Shawn Farquhar! He shares with us how and why he only does business with friends and gives us an amazing business card hack that constantly keeps him busy!
Shawn Farquhar is a magician from Canada who spends his time entertaining people around the world.

He’s performed for corporate clients like IBM and Konica, and has been featured on some of the most luxurious cruise lines like Norwegian Star and Radiance of the Seas.

You may have seen his magic on TV shows like the Fringe and Arrow, or movies like Spooky House and The Fly 2.

As for accolades, he really is a Magic Champion, being a two-time winner of the Magician of the Year Award by the Canadian Association of Magicians, Grand Prix D’Honneur from the P C A M, both Stage Magician and Sleight of Hand Magician of the Year by the International Brotherhood of Magicians, and his most prestigious award, Grand Prix World Champion of Magic from the Olympics of Magic in Beijing, China given in 2009.

Shawn also tours giving talks and lectures in the magic community at some of magic’s top conventions and events.