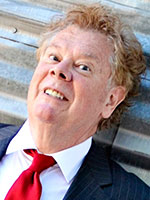 I had the wonderful honor of talking with magician Nick Lewin! One of the main things we talked about was corporate magic. We also talked about putting a twist on magic classics and there was was even a little performing advice taken from Billy McComb!