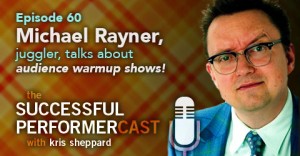 In this episode, I have the honor of interviewing Post Modern Vaudevillian, Michael Rayner about his career in juggling, mayhem, and on doing audience warmup shows! Yeah, he’s one of the guys that entertains live audiences between takes during TV show filmings!