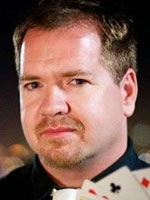 In this episode, I talk to Los Angeles magician Micah Cover. We talk about his career in magic and how a little bit of humanity can go a long way.

Micah has also agreed to give a free copy of his 73-page lecture notes, From the Trenches: The Pros & Cons of Being a Family Magic Entertainer, to all of our listeners. Listen at the end of the episode to find out how to get yours!

Micah Cover is a magician that spends his time performing all around Los Angels and has been a professional magician since 1995!

With a background in theater, improv and street magic, he brings his highly interactive magic shows everywhere from birthday parties, restaurants, large and small events, and a variety of different venues including the world famous Hollywood Magic Castle. It’s there where he produces the annual Night of the Raven, a yearly charity event for the Academy of Magical Arts.

In addition to performing magic, he also writes, lectures, and consults on the art of magic. You may have seen his work on TV on CNN and on the show 1,000 Ways to Die. Finally, he’s also an actor who’s appeared on Days of Our Lives and in a recurring roll on Dawson’s Creek.

As stated by the Magic Castle, Micah is an innovative performer with mind-boggling talent. His extraordinary effects will rock the room!