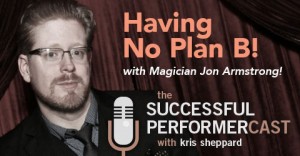 In this episode, magician Jon Armstrong talks about his career so far in magic and why he has no Plan B!