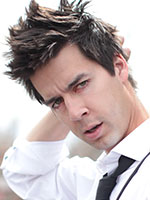 In this episode, I talk to comedian John Crist about his business and career in comedy. We touch on such topics as setting goals, taking risks, and failure. Enjoy!
John Crist is an award-winning comedian from Denver, CO who’s edgy, yet clean comedy has taken him around the country and made him popular with people of all ages.