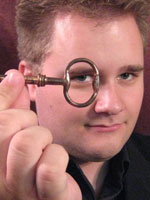 In this episode, I talk to paranormal magician Joe Diamond. We go into detail on publicity stunts and how to get the press to notice! We also have an interesting discussion on “Pay What You Want” pricing structures and he mentions an awesome resource that you probably already have but just aren’t using!

Joe Diamond is a paranormal magician from Chicago Illinois. Just in his twenties, Joe has been able to turn his fascination for the paranormal into a full time career and has an amazing understanding into the workings of the strange & bizarre, often defying the boundaries between what we assume can and can’t be done.

He was the youngest First Place winner of the “Close Up Magic Classic,” an award given in Colon Michigan, the Magic Capital of the World and now performs his paranormal magic all over the country for private parties, corporations, and theaters.

Four years ago, Joe performed the world’s largest mind reading demonstration: completing a 33 acre cornfield maze while blindfolded, finishing in less than three hours. In fact, with his public demonstrations, Joe has been able to get more attention from the press lately than a good old fashioned Hollywood scandal.

Magician Jay Sankey says it best” “Joe has great skill, a marvelous sense of humor and more energy than any other four magicians combined! What more could you want?”