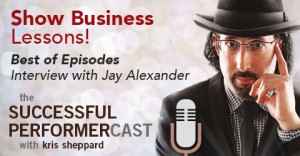 In this episode I talk to magician Jay Alexander! We talk all about various methods that Jay uses to market his business, encourage word of mouth, build relationships with his clients, and customize his shows!

Jay Alexander is one of the top corporate and society entertainers in the country and one of the highest paid magical performers in the industry.

Jay started his career early performing for the patrons of his parent’s shoe store. At the age of 14 he won the Society of American Magicians Gold Medal of Honor.

He now creates customized shows for Fortune 500 companies. Some of his corporate clients include Apple, Cisco, Lucas Films, Bank of America, Kaiser Permanente, Coca Cola, and Chrysler. He’s also performed at private parties and events for the likes of Robin Williams, The Rolling Stones, and Duran Duran.

In the words of Ron Wood from the Rolling Stones, “Jay is the best magician I have ever seen!”