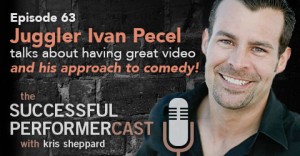 Ivan Pecel talks about his business as a professional juggler, targeting specific markets, and his take on comedy.