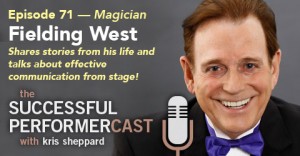 In this interview, Fielding West brings us into his career telling lots of stories from his past and then sharing with us some valuable tips on effective communication from stage. There are many great lesson to be learned from this talk. Enjoy!

Fielding is a comedy magician, teacher, and keynote speaker from Las Vegas.

He’s performed in a number of showrooms in Vegas, Tahoe, and Atlantic City like the Tropicana, Sahara, and Caesar’s Hotels. He’s appeared on a number of TV shows on a number of networks like A&E’s An Evening at the Improv, and CBS’ Entertainment Tonight.

He’s been the opening act for top names like Liza Minnelli, Phyllis Diller, The Temptations, and Earth Wind & Fire.

He also writes comedy for other magicians and runs a class called Stagecraft 101 where he teaches people how to communicate more effectively from stage.