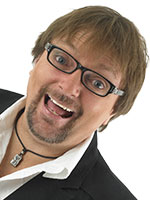 In this episode, I talk to CJ Johnson about his career in magic, hypnotism, and being a game show host! He talks about his approach to business and tells us how he found balance between work and family.

CJ Johnson is a magician, mentalist, hypnotist, and a game show host! He’s also author to more than a dozen books and self-hypnosis CD’s which includes his super popular book “More Shows, More Money” which has been credited to helping countless magicians take their passions full-time.

CJ is certainly qualified to teach this, as he maintains a full calendar traveling the country performing his shows as well as managing teams for his six touring “Game Shows to Go.”

When he’s not performing, he enjoys kiteboarding and flying precision stunt kites, but nothing is more important to him than being with his family, just outside of Austin TX.

This guy exudes entertainment and success.