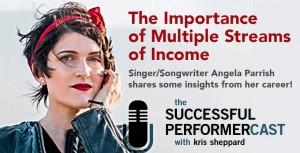 This week I have singer/songwriter Angela Parrish who shares with us about the importance of having multiple streams of income and how she runs her business. She also talks about how she saved for and completely self-funded $20,000 to record her latest album, Faithful and Tall.

Based out of Los Angeles, Angela creates her own brand of music, drawing inspiration from the likes of Carole King, Ray Charles, Eva Cassidy, Gregg Allman, and Alison Krauss. Her music has brought her great acclaim including second place for her song “The Couple Down the Hall” at the Songwriters Hall of Fame Song Competition, and having her song “Higher” selected as a finalist in the 2013 John Lennon Songwriting Contest. You may have heard her song “Different Tomorrow” which earned a primetime placement on CBS TV last summer. Thats not even mentioning her collaborating with top producers and musicians in the industry.